In this page you can download PNG image - bullet shot hole PNG image. 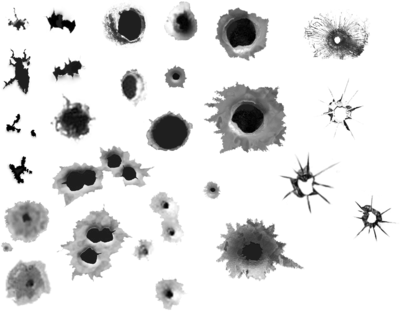 This image has format transparent PNG with resolution 400x311.
You can download this image in best resolution from this page and use it for design and web design.

Bullet - the word bullet is a firearm term. A bullet is a projectile expelled from the barrel of a firearm. The term is from Middle French and originated as the diminutive of the word boulle (boullet) which means "small ball." Bullets are made of a variety of materials. They are available singly as they would be used in muzzle loading and cap and ball firearms, as part of a paper cartridge, and much more commonly as a component of metallic cartridges. Bullets are made in a large numbers of styles and constructions depending on how they will be used. Many bullets have specialized functions, such as hunting, target shooting, training, defense, and warfare.

A bullet is not a cartridge. In paper and metallic cartridges a bullet is one component of the cartridge. Bullet sizes are expressed by their weight and diameter in both English and Metric measurement systems. For example: .22 caliber 55 grain bullets or 5.56mm 55 grain bullets are the same caliber and weight bullet. The word "bullet" is often used colloquially to refer to a cartridge, which is a combination of the bullet, paper or metallic case/shell, powder, and primer. This use of 'bullet', when 'cartridge' is intended, leads to confusion when the components of a cartridge are discussed or intended.