In this page you can download PNG image - MySQL logo PNG. 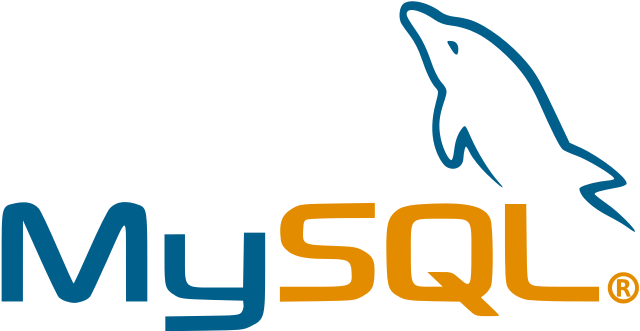 This image has format transparent PNG with resolution 640x331.
You can download this image in best resolution from this page and use it for design and web design.

MySQL is an open-source relational database management system (RDBMS). Its name is a combination of "My", the name of co-founder Michael Widenius's daughter, and "SQL", the abbreviation for Structured Query Language. The MySQL development project has made its source code available under the terms of the GNU General Public License, as well as under a variety of proprietary agreements. MySQL was owned and sponsored by a single for-profit firm, the Swedish company MySQL AB, now owned by Oracle Corporation. For proprietary use, several paid editions are available, and offer additional functionality.

MySQL is a central component of the LAMP open-source web application software stack (and other "AMP" stacks). LAMP is an acronym for "Linux, Apache, MySQL, Perl/PHP/Python". Applications that use the MySQL database include: TYPO3, MODx, Joomla, WordPress, Simple Machines Forum, phpBB, MyBB, and Drupal. MySQL is also used in many high-profile, large-scale websites, including Google (though not for searches), Facebook, Twitter, Flickr, and YouTube.

The MySQL server software itself and the client libraries use dual-licensing distribution. They are offered under GPL version 2, beginning from 28 June 2000 (which in 2009 has been extended with a FLOSS License Exception) or to use a proprietary license.

Support can be obtained from the official manual. Free support additionally is available in different IRC channels and forums. Oracle offers paid support via its MySQL Enterprise products. They differ in the scope of services and in price. Additionally, a number of third party organisations exist to provide support and services, including MariaDB and Percona.

MySQL has received positive reviews, and reviewers noticed it "performs extremely well in the average case" and that the "developer interfaces are there, and the documentation (not to mention feedback in the real world via Web sites and the like) is very, very good". It has also been tested to be a "fast, stable and true multi-user, multi-threaded sql database server"