In this page you can download PNG image - Cauldron PNG. 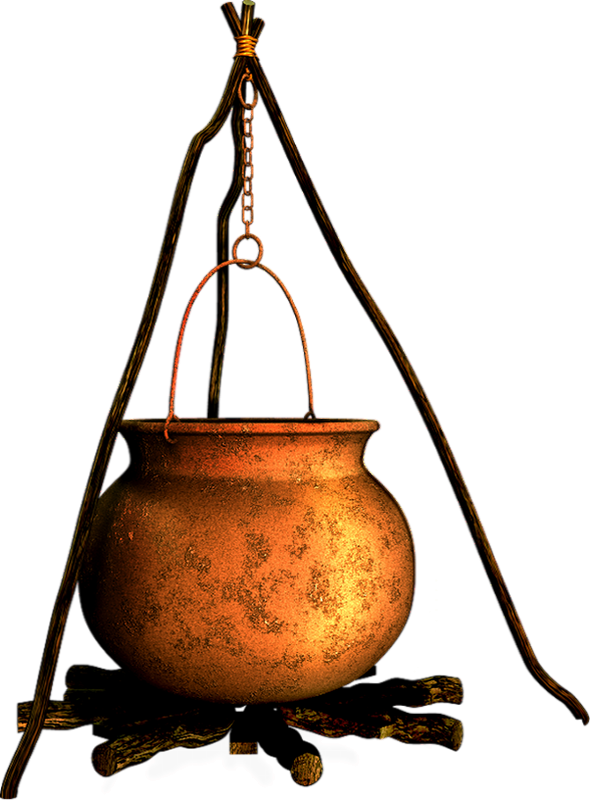 This image has format transparent PNG with resolution 590x800.
You can download this image in best resolution from this page and use it for design and web design.

A cauldron (or caldron) is a large metal pot (kettle) for cooking or boiling over an open fire, with a large mouth and frequently with an arc-shaped hanger.

A cauldron over a fire in William Blake's illustrations to his mythical Europe a Prophecy first published in 1794. This version of the print is currently held by the Fitzwilliam Museum

Cauldrons have largely fallen out of use in the developed world as cooking vessels. While still used for practical purposes, a more common association in Western culture is the cauldron's use in witchcraft—a clich? popularized by various works of fiction, such as Shakespeare's play Macbeth. In fiction, witches often prepare their potions in a cauldron. Also, in Irish folklore, a cauldron is purported to be where leprechauns keep their gold and treasure.

In some forms of Wicca, incorporating aspects of Celtic mythology, the cauldron is associated with the goddess Cerridwen. Welsh legend also tells of cauldrons that were useful to warring armies. In the second branch of the Mabinogi in the tale of Branwen, Daughter of Ll?r, the Pair Dadeni (Cauldron of Rebirth) is a magical cauldron in which dead warriors could be placed and then be returned to life, save that they lacked the power of speech. It was suspected that they lacked souls. These warriors could go back into battle until they were killed again. In Wicca and some other forms of neopagan or pagan belief systems the cauldron is still used in magical practices. Most often a cauldron is made of cast iron and is used to burn loose incense on a charcoal disc, to make black salt (used in banishing rituals), for mixing herbs, or to burn petitions (paper with words of power or wishes written on them). Cauldrons symbolize not only the Goddess but also represent the womb (because it holds something) and on an altar it represents earth because it is a working tool. Cauldrons are often sold in New Age or "metaphysical" stores and may have various symbols of power inscribed on them.

The holy grail of Arthurian legend is sometimes referred to as a "cauldron", although traditionally the grail is thought of as a hand-held cup rather than the large pot that the word "cauldron" usually is used to mean. This may have resulted from the combination of the grail legend with earlier Celtic myths of magical cauldrons.

The common translation for ding is often referred to as a cauldron. In Chinese history and culture, possession of one or more ancient dings is often associated with power and dominion over the land. Therefore, the ding is often used as an implicit symbolism for power. The term "inquiring of the ding" is often used interchangeably with the quest for power.