In this page you can download PNG image - earthworm worm PNG. 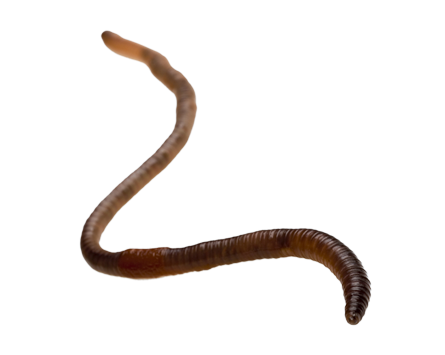 This image has format transparent PNG with resolution 445x355.
You can download this image in best resolution from this page and use it for design and web design.

An earthworm is a tube-shaped, segmented worm found in the phylum Annelida. Earthworms are commonly found living in soil, feeding on live and dead organic matter. An earthworm's digestive system runs through the length of its body. It conducts respiration through its skin. It has a double transport system composed of coelomic fluid that moves within the fluid-filled coelom and a simple, closed blood circulatory system. It has a central and a peripheral nervous system. The central nervous system consists of two ganglia above the mouth, one on either side, connected to a nerve cord running back along its length to motor neurons and sensory cells in each segment. Large numbers of chemoreceptors are concentrated near its mouth. Circumferential and longitudinal muscles on the periphery of each segment enable the worm to move. Similar sets of muscles line the gut, and their actions move the digesting food toward the worm's anus.

Earthworms are hermaphrodites: each individual carries both male and female sex organs. As invertebrates, they lack either an internal skeleton or exoskeleton, but maintain their structure with fluid-filled coelom chambers that function as a hydrostatic skeleton.

"Earthworm" is the common name for the largest members of Oligochaeta (which is either a class or a subclass depending on the author). In classical systems, they were placed in the order Opisthopora, on the basis of the male pores opening posterior to the female pores, though the internal male segments are anterior to the female. Theoretical cladistic studies have placed them, instead, in the suborder Lumbricina of the order Haplotaxida, but this may again soon change. Folk names for the earthworm include "dew-worm", "rainworm", "night crawler", and "angleworm" (due to its use as fishing bait).

Larger terrestrial earthworms are also called megadriles (which translates to "big worms"), as opposed to the microdriles ("small worms") in the semiaquatic families Tubificidae, Lumbricidae, and Enchytraeidae, among others. The megadriles are characterized by having a distinct clitellum (which is more extensive than that of microdriles) and a vascular system with true capillaries.

Earthworms are far less abundant in disturbed environments and are typically active only if water is present.