In this page you can download PNG image - Rubber duck PNG. 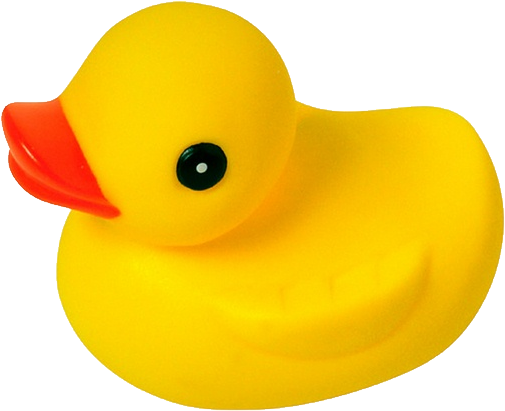 This image has format transparent PNG with resolution 505x411.
You can download this image in best resolution from this page and use it for design and web design.

A rubber duck is a toy shaped like a stylized duck, generally yellow with a flat base. It may be made of rubber or rubber-like material such as vinyl plastic. The yellow rubber duck has achieved an iconic status in Western pop culture and is often symbolically linked to bathing.

The history of the rubber duck is linked to the emergence of rubber manufacturing in the late 19th century. The earliest rubber ducks were made from harder rubber when manufacturers began using Charles Goodyear's invention, vulcanized rubber. Consequently, these solid rubber ducks were not capable of floating and were instead intended as chew toys.

Sculptor Peter Ganine created a sculpture of a duck in the 1940s. He then patented it and reproduced it as a floating toy, of which over 50 million were sold.

Besides the ubiquitous yellow rubber duck with which most people are familiar, there have been numerous novelty variations on the basic theme, including character ducks representing professions, politicians, or celebrities. There are also ducks that glow in the dark, quack, change color, have interior LED illumination, or include a wind-up engine that enables them to "swim". In 2001, The Sun, a British tabloid reported that Queen Elizabeth II has a rubber duck in her bathroom that wears an inflatable crown. The duck was spotted by a workman who was repainting her bathroom. The story prompted sales of rubber ducks in the United Kingdom to increase by 80% for a short period.

Rubber ducks are collected by enthusiasts. The 2007 Guinness World Record for World's Largest Rubber Duck Collection stood at 1,439 different rubber ducks, and was awarded to Charlotte Lee. In 2013, the rubber duck was inducted into the Toy Hall of Fame, a museum in Rochester, New York, along with the game of chess. Toys are selected based on factors like icon-status, longevity, and innovation.