In this page you can download PNG image - Jet fighter PNG. 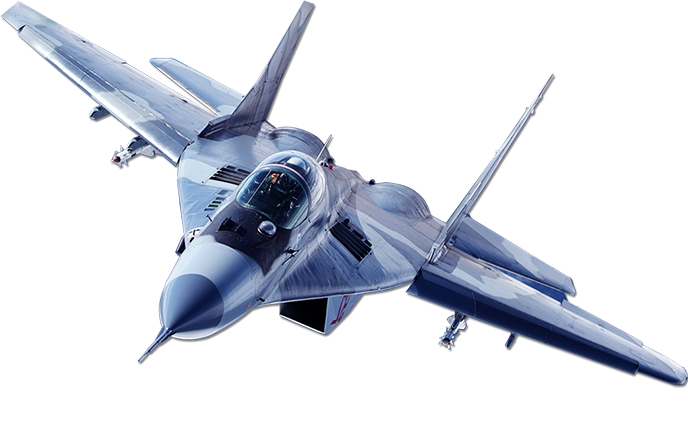 This image has format transparent PNG with resolution 688x435.
You can download this image in best resolution from this page and use it for design and web design.

A fighter aircraft is a military aircraft designed primarily for air-to-air combat against other aircraft, as opposed to bombers and attack aircraft, whose main mission is to attack ground targets. The hallmarks of a fighter are its speed, maneuverability, and small size relative to other combat aircraft.

Many fighters have secondary ground-attack capabilities, and some are designed as dual-purpose fighter-bombers; often aircraft that do not fulfill the standard definition are called fighters. This may be for political or national security reasons, for advertising purposes, or other reasons.

A fighter's main purpose is to establish air superiority over a battlefield. Since World War I, achieving and maintaining air superiority has been considered essential for victory in conventional warfare. The success or failure of a belligerent's efforts to gain air supremacy hinges on several factors including the skill of its pilots, the tactical soundness of its doctrine for deploying its fighters, and the numbers and performance of those fighters. Because of the importance of air superiority, since the early days of aerial combat armed forces have constantly competed to develop technologically superior fighters and to deploy these fighters in greater numbers, and fielding a viable fighter fleet consumes a substantial proportion of the defense budgets of modern armed forces.

The word "fighter" did not become the official English-language term for such aircraft until after World War I. In the British Royal Flying Corps and Royal Air Force these aircraft were referred to as "scouts" into the early 1920s. The U.S. Army called their fighters "pursuit" aircraft from 1916 until the late 1940s. In most languages a fighter aircraft is known as a hunter, or hunting aircraft (avion de chasse, Jagdflugzeuge, avi?n de caza etc.). Exceptions include Russian, where a fighter is an "истребитель" (pronounced "istrebitel"), meaning "exterminator", and Hebrew where it is "matose krav" (literally "battle plane").

As a part of military nomenclature, a letter is often assigned to various types of aircraft to indicate their use, along with a number to indicate the specific aircraft. The letters used to designate a fighter differ in various countries – in the English-speaking world, "F" is now used to indicate a fighter (e.g. Lockheed Martin F-35 Lightning II or Supermarine Spitfire F.22), though when the pursuit designation was used in the US, they were "P" types (e.g. Curtiss P-40 Warhawk). In Russia "I" was used (Polikarpov I-16), while the French continue to use "C".

Although the term "fighter" specifies aircraft designed to shoot down other aircraft, such designs are often also useful as multirole fighter-bombers, strike fighters, and sometimes lighter, fighter-sized tactical ground-attack aircraft. This has always been the case, for instance the Sopwith Camel and other "fighting scouts" of World War I performed a great deal of ground-attack work. In World War II, the USAAF and RAF often favored fighters over dedicated light bombers or dive bombers, and types such as the Republic P-47 Thunderbolt and Hawker Hurricane that were no longer competitive as aerial combat fighters were relegated to ground attack. Several aircraft, such as the F-111 and F-117, have received fighter designations though they had no fighter capability due to political or other reasons. The F-111B variant was originally intended for a fighter role with the U.S. Navy, but it was cancelled. This blurring follows the use of fighters from their earliest days for "attack" or "strike" operations against ground targets by means of strafing or dropping small bombs and incendiaries. Versatile multirole fighter-bombers such as the McDonnell Douglas F/A-18 Hornet are a less expensive option than having a range of specialized aircraft types.