In this page you can download PNG image - Omelette PNG. 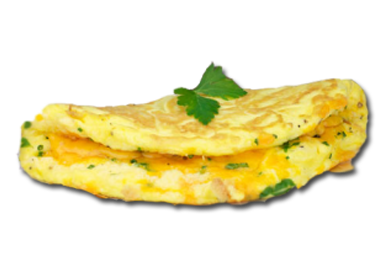 This image has format transparent PNG with resolution 380x264.
You can download this image in best resolution from this page and use it for design and web design.

In cuisine, an omelette or omelet is a dish made from beaten eggs fried with butter or oil in a frying pan (without stirring as in scrambled egg). It is quite common for the omelette to be folded around a filling such as cheese, chives, vegetables, mushrooms, meat (often ham or bacon), or some combination of the above. Whole eggs or sometimes only egg whites are beaten with a small amount of milk, cream, or even water.

The fluffy omelette is a refined version of an ancient food. According to Alan Davidson, the French word omelette came into use during the mid-16th century, but the versions alumelle and alumete are employed by the M?nagier de Paris (II, 5) in 1393. Rabelais (Pantagruel, IV, 9) mentions an homelaicte d'oeufs, Olivier de Serres an amelette, Fran?ois Pierre La Varenne's Le cuisinier fran?ois (1651) has aumelette, and the modern omelette appears in Cuisine bourgoise (1784).

According to the founding legend of the annual giant Easter omelette of Bessi?res, Haute-Garonne, when Napoleon Bonaparte and his army were traveling through southern France, they decided to rest for the night near the town of Bessi?res. Napoleon feasted on an omelette prepared by a local innkeeper, and thought it was a culinary delight. He then ordered the townspeople to gather all the eggs in the village and to prepare a huge omelette for his army the next day