In this page you can download PNG image - Bacteria PNG. 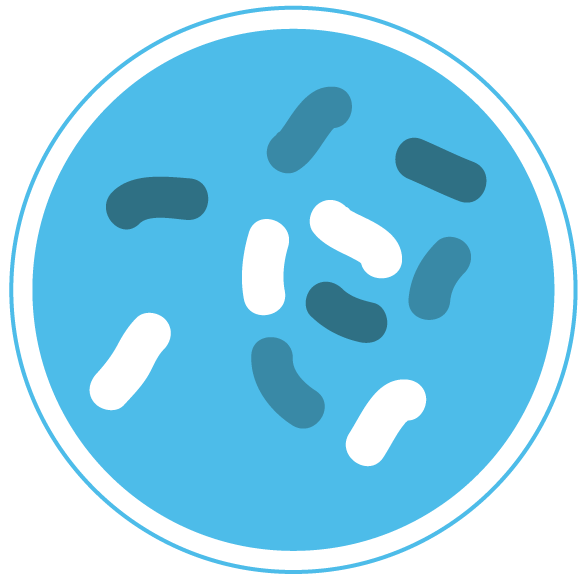 This image has format transparent PNG with resolution 588x577.
You can download this image in best resolution from this page and use it for design and web design.

Bacteria common noun bacteria, singular bacterium) constitute a large domain of prokaryotic microorganisms. Typically a few micrometres in length, bacteria have a number of shapes, ranging from spheres to rods and spirals. Bacteria were among the first life forms to appear on Earth, and are present in most of its habitats. Bacteria inhabit soil, water, acidic hot springs, radioactive waste, and the deep portions of Earth's crust. Bacteria also live in symbiotic and parasitic relationships with plants and animals. Most bacteria have not been characterised, and only about half of the bacterial phyla have species that can be grown in the laboratory. The study of bacteria is known as bacteriology, a branch of microbiology.

There are typically 40 million bacterial cells in a gram of soil and a million bacterial cells in a millilitre of fresh water. There are approximately 5?1030 bacteria on Earth,[5] forming a biomass which exceeds that of all plants and animals. Bacteria are vital in many stages of the nutrient cycle by recycling nutrients such as the fixation of nitrogen from the atmosphere. The nutrient cycle includes the decomposition of dead bodies and bacteria are responsible for the putrefaction stage in this process. In the biological communities surrounding hydrothermal vents and cold seeps, extremophile bacteria provide the nutrients needed to sustain life by converting dissolved compounds, such as hydrogen sulphide and methane, to energy. In March 2013, data reported by researchers in October 2012, was published. It was suggested that bacteria thrive in the Mariana Trench, which with a depth of up to 11 kilometres is the deepest known part of the oceans. Other researchers reported related studies that microbes thrive inside rocks up to 580 metres below the sea floor under 2.6 kilometres of ocean off the coast of the northwestern United States. According to one of the researchers, "You can find microbes everywhere—they're extremely adaptable to conditions, and survive wherever they are."

The largest number exist in the gut flora, and a large number on the skin. The vast majority of the bacteria in the body are rendered harmless by the protective effects of the immune system, though many are beneficial particularly in the gut flora. However several species of bacteria are pathogenic and cause infectious diseases, including cholera, syphilis, anthrax, leprosy, and bubonic plague. The most common fatal bacterial diseases are respiratory infections, with tuberculosis alone killing about 2 million people per year, mostly in sub-Saharan Africa. In developed countries, antibiotics are used to treat bacterial infections and are also used in farming, making antibiotic resistance a growing problem. In industry, bacteria are important in sewage treatment and the breakdown of oil spills, the production of cheese and yogurt through fermentation, the recovery of gold, palladium, copper and other metals in the mining sector, as well as in biotechnology, and the manufacture of antibiotics and other chemicals.