In this page you can download PNG image - Rusk PNG. 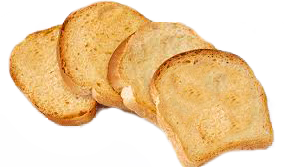 This image has format transparent PNG with resolution 284x167.
You can download this image in best resolution from this page and use it for design and web design.

A rusk is a hard, dry biscuit or a twice-baked bread. It is sometimes used as a baby teething food. In the United Kingdom, the name also refers to a wheat-based food additive.

The Russian version is called sookhar'. They are either baked a second time from sweet Challah-like bread, sliced in biscotti fashion or just made of leftover stale bread, cut into small cubes and air-dried or baked at a very low temperature. The first one is like a cookie, good with milk, kefir, tea, coffee or cacao drinking. The second one is usually added to soup, clear or otherwise, softening up from absorbed liquids and accompanying it instead of bread. It became a tradition in order not to waste any leftover bread, that always was a staple in Russian cuisine, was hard labored for and respected for thousands of years. There is a lot of folklore and sayings about bread in Russian language, paying due respect to this grain food that is one of the corner stones of Slavic nations life and history.