In this page you can download PNG image - Crow PNG image. 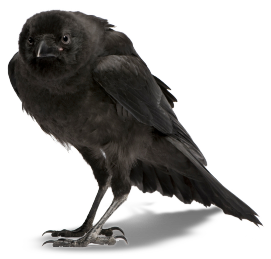 This image has format transparent PNG with resolution 271x259.
You can download this image in best resolution from this page and use it for design and web design.

A crow is a bird of the genus Corvus. The term "crow" is used both as part of the common name of many species, and collectively for all of Corvus.

American crows are common, widespread, and susceptible to the West Nile virus, making them useful as a bioindicator to track the virus's spread. Direct transmission of the virus from American crows to humans is unheard of and unlikely.