In this page you can download PNG image - Mine PNG. 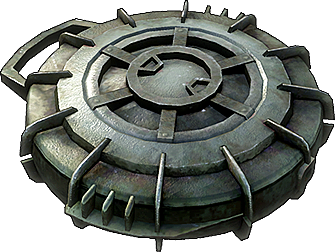 This image has format transparent PNG with resolution 335x252.
You can download this image in best resolution from this page and use it for design and web design.

The mines are often designed to injure, not kill, their victims in order to increase the logistical (mostly medical) support required by enemy forces that encounter them. Some types of anti-personnel mines can also damage the tracks on armoured vehicles or the tires of wheeled vehicles.

The International Campaign to Ban Landmines has sought to ban mines culminating in the 1997 Ottawa Treaty, although this treaty has not yet been accepted by a number of countries including the United States, Russia, the People's Republic of China, Pakistan and India.