In this page you can download PNG image - Falcon PNG. 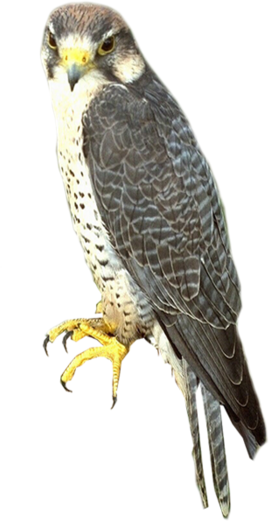 This image has format transparent PNG with resolution 269x521.
You can download this image in best resolution from this page and use it for design and web design.

Falcons are birds of prey in the genus Falco, which includes about 40 species. Falcons are widely distributed on all continents of the world except Antarctica (though closely related raptors did occur there in the Eocene).

Adult falcons have thin, tapered wings, which enable them to fly at high speed and change direction rapidly. Fledgling falcons, in their first year of flying, have longer flight feathers, which make their configuration more like that of a general-purpose bird such as a broadwing. This makes flying easier while learning the exceptional skills required to be effective hunters as adults.

The falcons are the largest genus in the Falconinae subfamily of Falconidae, which itself also includes another subfamily comprising caracaras and a few other species. All these birds kill with their beaks, using a "tooth" on the side of their beaks—unlike the hawks, eagles, and other birds of prey in the Accipitridae, which use their feet.

The largest falcon is the gyrfalcon at up to 65 cm in length. The smallest falcons are the kestrels, of which the Seychelles kestrel measures just 25 cm. As with hawks and owls, falcons exhibit sexual dimorphism, with the females typically larger than the males, thus allowing a wider range of prey species.

Some small falcons with long, narrow wings are called "hobbies", and some which hover while hunting are called "kestrels".

As is the case with many birds of prey, falcons have exceptional powers of vision; the visual acuity of one species has been measured at 2.6 times that of a normal human. Peregrine falcons have been recorded diving at speeds of 200 miles per hour (320 km/h), making them the fastest-moving creatures on Earth.