In this page you can download PNG image - Hedgehog PNG. 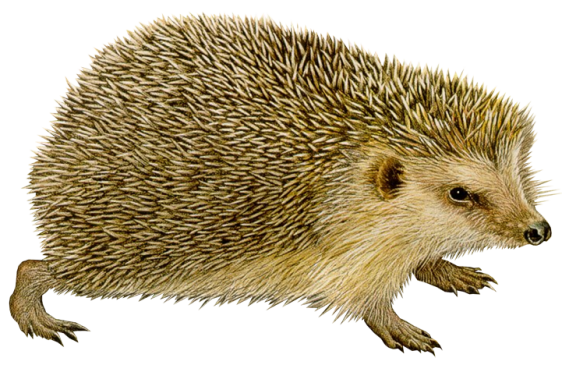 This image has format transparent PNG with resolution 562x365.
You can download this image in best resolution from this page and use it for design and web design.

A hedgehog is any of the spiny mammals of the subfamily Erinaceinae, in the eulipotyphlan family Erinaceidae. There are seventeen species of hedgehog in five genera, found through parts of Europe, Asia, and Africa, and in New Zealand by introduction. There are no hedgehogs native to Australia, and no living species native to the Americas (the extinct genus Amphechinus was once present in North America). Hedgehogs share distant ancestry with shrews (family Soricidae), with gymnures possibly being the intermediate link, and have changed little over the last 15 million years. Like many of the first mammals, they have adapted to a nocturnal way of life. Hedgehogs' spiny protection resembles that of the unrelated porcupines, which are rodents, and echidnas, a type of monotreme.

The name hedgehog came into use around the year 1450, derived from the Middle English heyghoge, from heyg, hegge ("hedge"), because it frequents hedgerows, and hoge, hogge ("hog"), from its piglike snout. Other names include urchin, hedgepig and furze-pig. The collective noun for a group of hedgehogs is array.

Hedgehogs are easily recognized by their spines, which are hollow hairs made stiff with keratin. Their spines are not poisonous or barbed and unlike the quills of a porcupine, do not easily detach from their bodies. However, the immature animal's spines normally fall out as they are replaced with adult spines. This is called "quilling". Spines can also shed when the animal is diseased or under extreme stress.

A defense that all species of hedgehogs possess is the ability to roll into a tight ball, causing all of the spines to point outwards. The hedgehog's back contains two large muscles that control the position of the quills. When the creature is rolled into a ball, the quills on the back protect the tucked face, feet, and belly, which are not quilled. Since the effectiveness of this strategy depends on the number of spines, some desert hedgehogs that evolved to carry less weight are more likely to flee or even attack, ramming an intruder with the spines; rolling into a spiny ball for those species is a last resort. The various species are prey to different predators: while forest hedgehogs are prey primarily to birds (especially owls) and ferrets, smaller species like the long-eared hedgehog are prey to foxes, wolves, and mongooses.

Hedgehogs are primarily nocturnal, though some species can also be active during the day. Hedgehogs sleep for a large portion of the day under bushes, grasses, rocks, or most commonly in dens dug in the ground, with varying habits among the species. All wild hedgehogs can hibernate, though not all do, depending on temperature, species, and abundance of food.