In this page you can download PNG image - number 8 PNG. 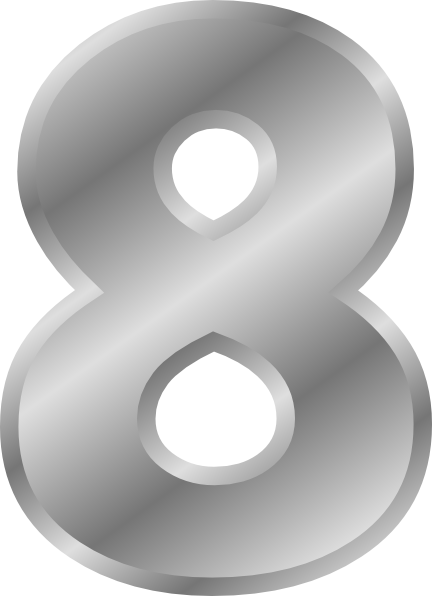 This image has format transparent PNG with resolution 432x596.
You can download this image in best resolution from this page and use it for design and web design.

The modern digit 8, like all modern Arabic numerals other than zero, originates with the Brahmi numerals. The Brahmi digit for eight by the 1st century was written in one stroke as a curve └┐ looking like an uppercase H with the bottom half of the left line and the upper half of the right line removed. However the digit for eight used in India in the early centuries of the Common Era developed considerable graphic variation, and in some cases took the shape of a single wedge, which was adopted into the Perso-Arabic tradition as ٨ (and also gave rise to the later Devanagari form ८); the alternative curved glyph also existed as a variant in Perso-Arabic tradition, where it came to look similar to our digit 5.

The digits as used in Al-Andalus by the 10th century were a distinctive western variant of the glyphs used in the Arabic-speaking world, known as ghubār numerals (ghubār translating to "sand table"). In these digits, the line of the 5-like glyph used in Indian manuscripts for eight came to be formed in ghubār as a closed loop, which was the 8-shape that became adopted into European use in the 10th century.

Just as in most modern typefaces, in typefaces with text figures the character for the digit 8 usually has an ascender.

The infinity symbol ∞, described as a "sideways figure eight" is unrelated to the digit 8 in origin; it is first used (in the mathematical meaning "infinity") in the 17th century, and it may be derived from the Roman numeral for "one thousand" CIƆ, or alternatively from the final Greek letter, ω.