In this page you can download PNG image - Ginger PNG. 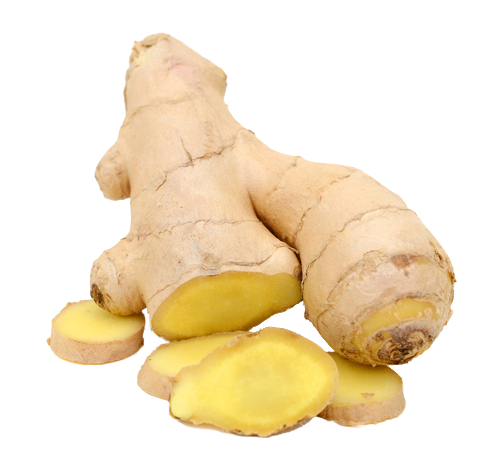 This image has format transparent PNG with resolution 500x456.
You can download this image in best resolution from this page and use it for design and web design.

Ginger (Zingiber officinale) is a flowering plant whose rhizome, ginger root or ginger, is widely used as a spice and a folk medicine. It is a herbaceous perennial which grows annual pseudostems (false stems made of the rolled bases of leaves) about one meter tall bearing narrow leaf blades. The inflorescences bear flowers having pale yellow petals with purple edges, and arise directly from the rhizome on separate shoots.

Ginger is in the family Zingiberaceae, which also includes turmeric (Curcuma longa), cardamom (Elettaria cardamomum), and galangal. Ginger originated in Maritime Southeast Asia and was likely domesticated first by the Austronesian peoples. It was transported with them throughout the Indo-Pacific during the Austronesian expansion (c. 5,000 BP), reaching as far as Hawaii. Ginger is one of the first spices to have been exported from Asia, arriving in Europe with the spice trade, and was used by ancient Greeks and Romans. The distantly related dicots in the genus Asarum are commonly called wild ginger because of their similar taste. In 2018, world production of ginger was 2.8 million tonnes, led by India with 32% of the world total.

In 2018, global production of ginger was 2.8 million tonnes, led by India with 32% of the world total. China, Nigeria, and Nepal also had substantial production.

Ginger is a very popular spice used worldwide; whether it be used to spice up meals, or as a medicine, the demand for ginger all over the world has been consistent throughout history. Ginger can be used for a variety of food or medicine items such as vegetables, candy, soda, pickles, and alcoholic beverages.

Ginger is a fragrant kitchen spice. Young ginger rhizomes are juicy and fleshy with a mild taste. They are often pickled in vinegar or sherry as a snack or cooked as an ingredient in many dishes. They can be steeped in boiling water to make ginger herb tea, to which honey may be added. Ginger can be made into candy or ginger wine.

Mature ginger rhizomes are fibrous and nearly dry. The juice from ginger roots is often used as a seasoning in Indian recipes and is a common ingredient of Chinese, Korean, Japanese, Vietnamese, and many South Asian cuisines for flavoring dishes such as seafood, meat, and vegetarian dishes.

Fresh ginger can be substituted for ground ginger at a ratio of six to one, although the flavors of fresh and dried ginger are somewhat different. Powdered dry ginger root is typically used as a flavoring for recipes such as gingerbread, cookies, crackers and cakes, ginger ale, and ginger beer. Candied ginger or crystallized ginger, known in the UK as "stem ginger", is the root cooked in sugar until soft, and is a type of confectionery. Fresh ginger may be peeled before eating. For longer-term storage, the ginger can be placed in a plastic bag and refrigerated or frozen.Raw ginger is composed of 79% water, 18% carbohydrates, 2% protein, and 1% fat (table). In 100 grams (a standard amount used to compare with other foods), raw ginger supplies 80 Calories and contains moderate amounts of vitamin B6 (12% of the Daily Value, DV) and the dietary minerals, magnesium (12% DV) and manganese (11% DV), but otherwise is low in nutrient content (table).

When used as a spice powder in a common serving amount of one US tablespoon (5 grams), ground dried ginger (9% water) provides negligible content of essential nutrients, with the exception of manganese (70% DV).