In this page you can download PNG image - Squirrel PNG. 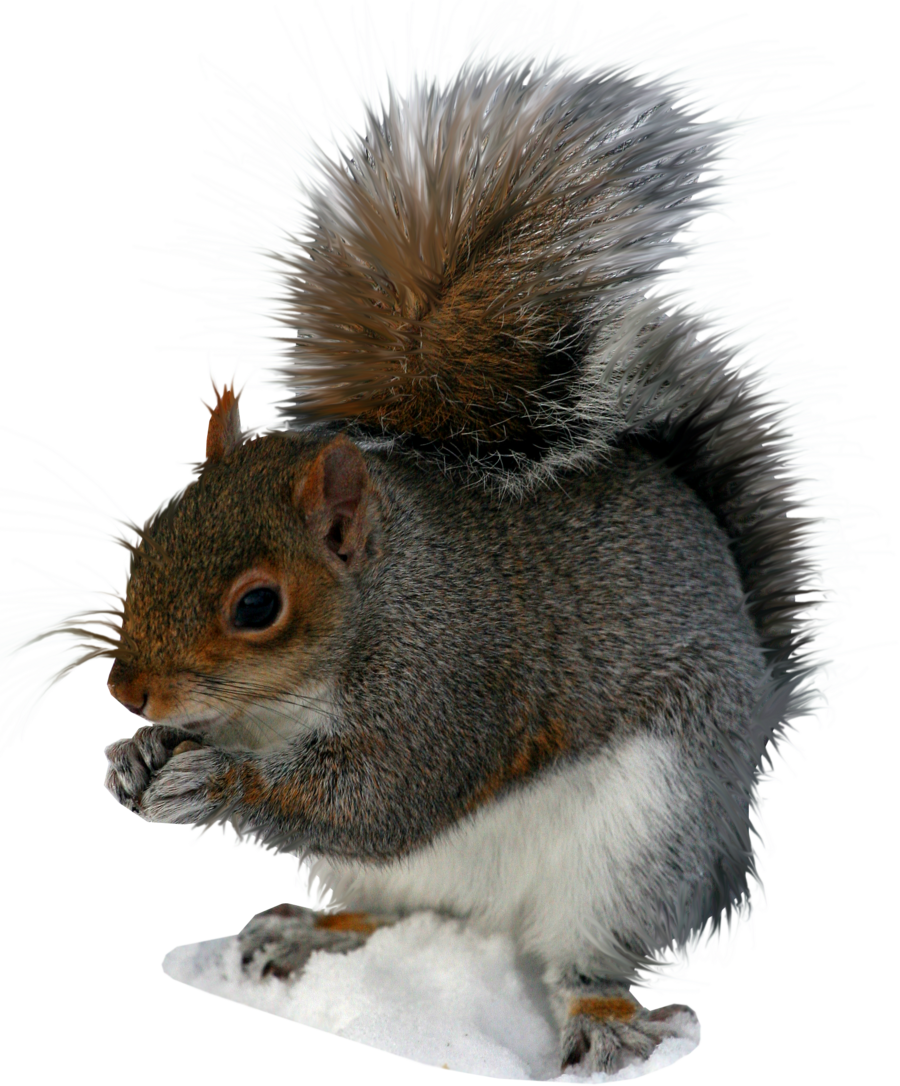 This image has format transparent PNG with resolution 900x1086.
You can download this image in best resolution from this page and use it for design and web design.

Squirrels are members of the family Sciuridae, a family that includes small or medium-size rodents. The squirrel family includes tree squirrels, ground squirrels, chipmunks, marmots (including groundhogs), flying squirrels, and prairie dogs amongst other rodents. Squirrels are indigenous to the Americas, Eurasia, and Africa, and were introduced by humans to Australia. The earliest known fossilized squirrels date from the Eocene epoch, and among other living rodent families, the squirrels are most closely related to the mountain beaver and to the dormice.

The word "squirrel", first attested in 1327, comes from the Anglo-Norman esquirel which is from the Old French escurel, the reflex of a Latin word sciurus, which was taken from the Ancient Greek word σκίουρος (from σκία-ουρος), skiouros, "shadow-tailed", referring to the long bushy tail which many of its members have.

Squirrels are generally small animals, ranging in size from the African pygmy squirrel and least pygmy squirrel at 10–14 cm (3.9–5.5 in) in total length and just 12–26 g (0.42–0.92 oz) in weight, to the Bhutan giant flying squirrel at up to 1.27 m (4 ft 2 in) in total length, and several marmot species, which can weigh 8 kg (18 lb) or more. Squirrels typically have slender bodies with bushy tails and large eyes. In general, their fur is soft and silky, though much thicker in some species than others. The coat color of squirrels is highly variable between—and often even within—species.

In most squirrel species, the hind limbs are longer than the fore limbs, while all species have either four or five toes on each paw. The paws, which include an often poorly developed thumb, have soft pads on the undersides and versatile, sturdy claws for grasping and climbing. Tree squirrels, unlike most mammals, can descend a tree head-first. They do so by rotating their ankles 180 degrees, enabling the hind paws to point backward and thus grip the tree bark from the opposite direction.

Squirrels live in almost every habitat, from tropical rainforest to semiarid desert, avoiding only the high polar regions and the driest of deserts. They are predominantly herbivorous, subsisting on seeds and nuts, but many will eat insects and even small vertebrates.

As their large eyes indicate, squirrels have an excellent sense of vision, which is especially important for the tree-dwelling species. Many also have a good sense of touch, with vibrissae on their limbs as well as their heads.

Many juvenile squirrels die in the first year of life. Adult squirrels can have a lifespan of 5 to 10 years in the wild. Some can survive 10 to 20 years in captivity. Premature death may be caused when a nest falls from the tree, in which case the mother may abandon her young if their body temperature is not correct. Many such baby squirrels have been rescued and fostered by a professional wildlife rehabilitator until they could be safely returned to the wild, although the density of squirrel populations in many places and the constant care required by premature squirrels means that few rehabilitators are willing to spend their time doing this and such animals are routinely euthanized instead.

Squirrels mate either once or twice a year and, following a gestation period of three to six weeks, give birth to a number of offspring that varies by species. The young are altricial, being born naked, toothless, and blind. In most species of squirrel, the female alone looks after the young, which are weaned at six to ten weeks and become sexually mature by the end of their first year. In general, the ground-dwelling squirrel species are social, often living in well-developed colonies, while the tree-dwelling species are more solitary.

Because squirrels cannot digest cellulose, they must rely on foods rich in protein, carbohydrates, and fats. In temperate regions, early spring is the hardest time of year for squirrels because the nuts they buried are beginning to sprout (and thus are no longer available to eat), while many of the usual food sources have not yet become available. During these times, squirrels rely heavily on the buds of trees. Squirrels, being primarily herbivores, eat a wide variety of plants, as well as nuts, seeds, conifer cones, fruits, fungi, and green vegetation. Some squirrels, however, also consume meat, especially when faced with hunger. Squirrels have been known to eat small birds, young snakes, and smaller rodents, as well as bird eggs and insects. Some tropical squirrel species have shifted almost entirely to a diet of insects.

Squirrels, like pigeons and other fauna, are synanthropes, in that they benefit and thrive from their interaction in human environments. This gradual process of successful interaction is called synurbanization, wherein squirrels lose their inherent fear of humans in an urban environment. When squirrels were almost completely eradicated during the Industrial Revolution in New York, they were later re-introduced to "entertain and remind" humans of nature. The squirrel blended into the urban environment so efficiently that when synanthropic behavior stops (i.e. people do not leave trash outside during particularly cold winters), they can become aggressive in their search for food.

Aggression and predatory behavior has been observed in various species of ground squirrels, in particular the thirteen-lined ground squirrel. For example, Bernard Bailey, a scientist in the 1920s, observed a thirteen-lined ground squirrel preying upon a young chicken. Wistrand reported seeing this same species eating a freshly killed snake. There has also been at least one 2005 report of squirrels preying on atypical animals, such as an incident where a pack of black squirrels killed and ate a large stray dog in Lazo, Russia. ]As well, squirrel attacks on humans are exceedingly rare, but do occur.

Whitaker examined the stomachs of 139 thirteen-lined ground squirrels and found bird flesh in four of the specimens and the remains of a short-tailed shrew in one; Bradley, examining the stomachs of white-tailed antelope squirrels, found at least 10% of his 609 specimens' stomachs contained some type of vertebrate, mostly lizards and rodents. Morgart observed a white-tailed antelope squirrel capturing and eating a silky pocket mouse.