In this page you can download PNG image - hand grenade PNG image. 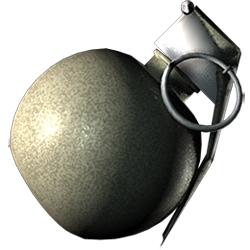 This image has format transparent PNG with resolution 250x250.
You can download this image in best resolution from this page and use it for design and web design.

A grenade is an explosive weapon typically thrown by hand (also called by the retronym hand grenade), but can also refer to a shell (explosive projectile) shot out by a rifles (as a rifle grenade) or a grenade launcher. A modern hand grenade generally consists of an explosive charge ("filler"), a detonator mechanism, an internal striker to trigger the detonator, and a safety lever secured by a linchpin. The user pulls the safety pin before throwing, and once thrown the safety lever gets released, allowing the striker to trigger a primer that ignites a fuze (sometimes called the delay element), which burns down to the detonator and explodes the main charge.

Grenades work by dispersing shrapnels (fragmentation grenades), shockwave (high explosive, stun and anti-tank grenades), chemical aerosols (smoke and gas grenades) and flammables (incendiary grenades). Fragmentation grenades (or "frags") are probably the most common in modern armies, and when the word grenade is used colloquially, it is generally assumed to refer to a fragmentation grenade. Their outer casings, generally made of a hard synthetic material or steel, are designed to rupture and fragmentize on detonation, sending out numerous fragments (shards and splinters) as fast-flying projectiles. In modern grenades, a pre-formed fragmentation matrix inside the grenade is commonly used, which may be spherical, cuboid, wire or notched wire. Most anti-personnel (AP) grenades are designed to detonate either after a time delay or on impact.

Grenades are typically oval/round-shaped with a "pineapple" or "baseball" appearance that fits the grasp of a normal-sized hand, but may also be mounted at the end of a handle, known as a "stick grenade". The term commonly refers to the German Stielhandgranate-style grenades introduced in 1915 and extensively used in World War I and World War II for trench and urban combats, by the Central Powers and Nazi Germany, while the Triple Entente and Allied powers typically favored the more traditional rounded grenades. The stick design provides leverage for throwing longer distances, but at the cost of additional weight and length, and has been considered obsolete since World War II and the Cold War periods. A friction igniter was used; this method was uncommon in other countries but widely used for German grenades.

When the word grenade is used without specification, and context does not suggest otherwise, it is generally assumed to refer to a fragmentation grenade.

Fragmentation grenades can be divided into two main types, defensive and offensive, where the former are designed to be used from a position of cover (e.g. in a slit trench or behind a suitable wall) against an open area outside, and have an effective kill radius greater than the distance they can be thrown; while the latter are for use by assaulting troops, and have a smaller effective radius.

Modern fragmentation grenades, such as the United States M67 grenade, have a wounding radius of 15 m (49 ft) – half that of older style grenades, which can still be encountered – and can be thrown about 40 m (130 ft). Fragments may travel more than 200 m (660 ft).