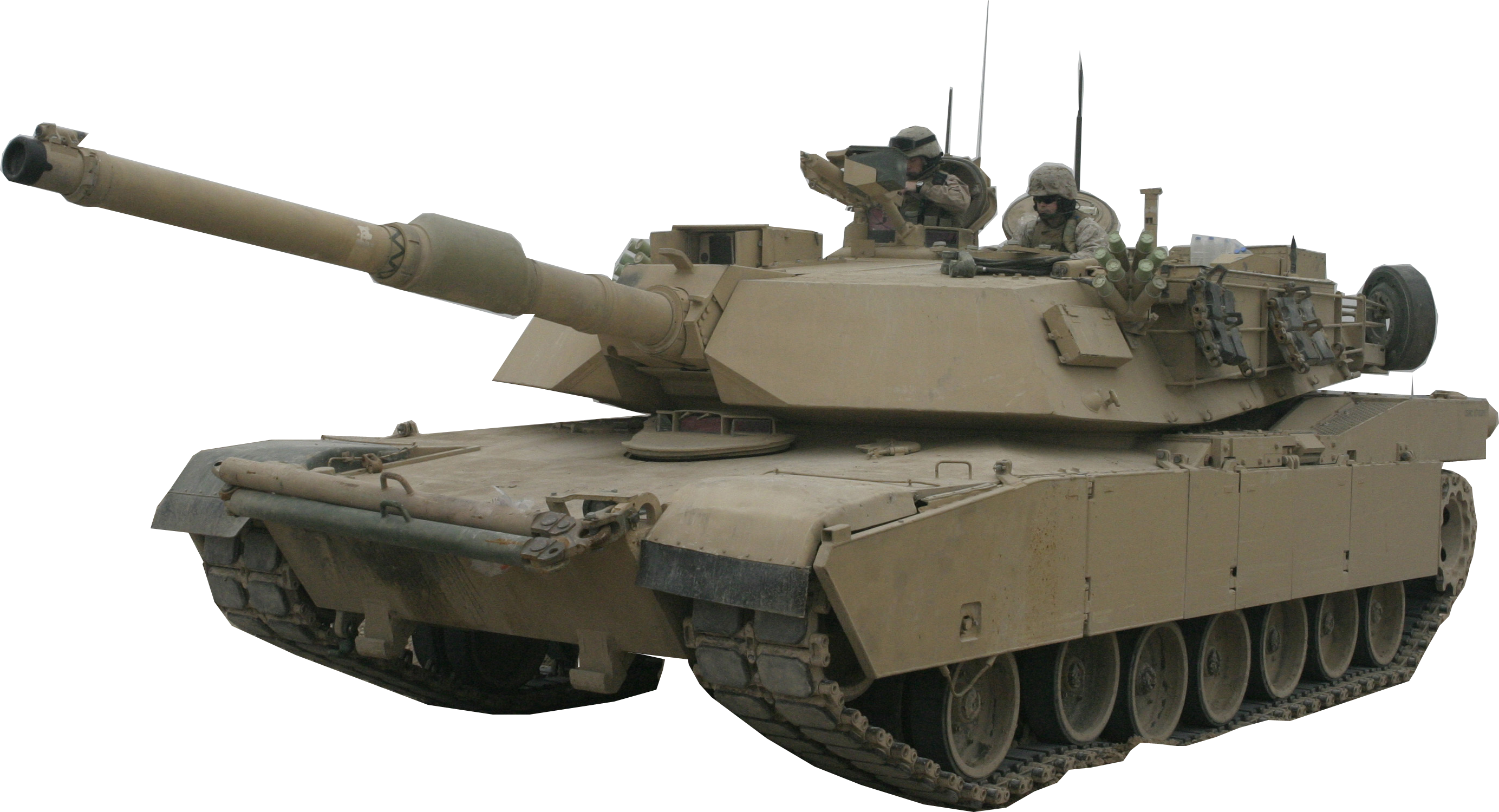 This image has format transparent PNG with resolution 2768x1500.
You can download this image in best resolution from this page and use it for design and web design.

A tank is an armoured fighting vehicle intended as a primary offensive weapon in front-line ground combat. Tank designs are a balance of heavy firepower, strong armour, and good battlefield mobility provided by tracks and a powerful engine; usually their main armament is mounted in a turret. They are a mainstay of modern 20th and 21st century ground forces and a key part of combined arms combat.

Modern tanks are versatile mobile land weapons platforms whose main armament is a large-caliber tank gun mounted in a rotating gun turret, supplemented by machine guns or other ranged weapons such as anti-tank guided missiles or rocket launchers. They have heavy vehicle armour which provides protection for the crew, the vehicle's munition storage, fuel tank and propulsion systems. The use of tracks rather than wheels provides improved operational mobility which allows the tank to overcome rugged terrain and adverse conditions such as mud and ice/snow better than wheeled vehicles, and thus be more flexibly positioned at advantageous locations on the battlefield. These features enable the tank to perform well in a variety of intense combat situations, simultaneously both offensively (with direct fire from their powerful main gun) and defensively (as fire support and defilade for friendly troops due to the near invulnerability to common infantry small arms and good resistance against most heavier weapons), all while maintaining the mobility needed to exploit changing tactical situations. Fully integrating tanks into modern military forces spawned a new era of combat: armoured warfare.

Until the arrival of the main battle tank, tanks were typically categorised either by weight class (light, medium, heavy or superheavy tanks) or doctrinal purpose (breakthrough-, cavalry-, infantry- or reconnaissance tanks). Some being larger and very heavily armoured and with large guns, while others are smaller, lightly armoured, and equipped with a smaller calibre and lighter gun. These smaller tanks move over terrain with speed and agility and can perform a reconnaissance role in addition to engaging enemy targets. The smaller, faster tank would not normally engage in battle with a larger, heavily armoured tank, except during a surprise flanking manoeuvre.

The modern tank is the result of a century of development from the first primitive armoured vehicles, due to improvements in technology such as the internal combustion engine, which allowed the rapid movement of heavy armoured vehicles. As a result of these advances, tanks underwent tremendous shifts in capability in the years since their first appearance. Tanks in World War I were developed separately and simultaneously by Great Britain and France as a means to break the deadlock of trench warfare on the Western Front. The first British prototype, nicknamed Little Willie, was constructed at William Foster & Co. in Lincoln, England in 1915, with leading roles played by Major Walter Gordon Wilson who designed the gearbox and hull, and by William Tritton of William Foster and Co., who designed the track plates. This was a prototype of a new design that would become the British Army's Mark I tank, the first tank used in combat in September 1916 during the Battle of the Somme. The name "tank" was adopted by the British during the early stages of their development, as a security measure to conceal their purpose (see etymology). While the British and French built thousands of tanks in World War I, Germany was unconvinced of the tank's potential, and did not have enough resources, thus it built only twenty.

Tanks of the interwar period evolved into the much larger and more powerful designs of World War II. Important new concepts of armoured warfare were developed; the Soviet Union launched the first mass tank/air attack at Khalkhin Gol (Nomonhan) in August 1939, and later developed the T-34, one of the predecessors of the main battle tank. Less than two weeks later, Germany began their large-scale armoured campaigns that would become known as blitzkrieg ("lightning war") – massed concentrations of tanks combined with motorised and mechanised infantry, artillery and air power designed to break through the enemy front and collapse enemy resistance.

The widespread introduction of high-explosive anti-tank warheads during the second half of World War II led to lightweight infantry-carried anti-tank weapons such as the Panzerfaust, which could destroy some types of tanks. Tanks in the Cold War were designed with these weapons in mind, and led to greatly improved armour types during the 1960s, especially composite armour. Improved engines, transmissions and suspensions allowed tanks of this period to grow larger. Aspects of gun technology changed significantly as well, with advances in shell design and aiming technology.

During the Cold War, the main battle tank concept arose and became a key component of modern armies. In the 21st century, with the increasing role of asymmetrical warfare and the end of the Cold War, that also contributed to the increase of cost-effective anti-tank rocket propelled grenades (RPGs) worldwide and its successors, the ability of tanks to operate independently has declined. Modern tanks are more frequently organized into combined arms units which involve the support of infantry, who may accompany the tanks in infantry fighting vehicles, and supported by reconnaissance or ground-attack aircraft.