In this page you can download PNG image - Crocodile PNG. 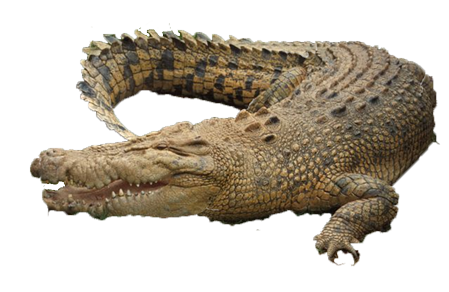 This image has format transparent PNG with resolution 449x292.
You can download this image in best resolution from this page and use it for design and web design.

Crocodiles (subfamily Crocodylinae) or true crocodiles are large aquatic reptiles that live throughout the tropics in Africa, Asia, the Americas and Australia. Crocodylinae, all of whose members are considered true crocodiles, is classified as a biological subfamily. A broader sense of the term crocodile, Crocodylidae that includes Tomistoma, is not used in this article. The term crocodile here applies only to the species within the subfamily of Crocodylinae. The term is sometimes used even more loosely to include all extant members of the order Crocodilia, which includes Tomistoma, the alligators and caimans (family Alligatoridae), the gharials (family Gavialidae), and all other living and fossil Crocodylomorpha.

Although they appear to be similar to the untrained eye, crocodiles, alligators and the gharial belong to separate biological families. The gharial having a narrow snout is easier to distinguish, while morphological differences are more difficult to spot in crocodiles and alligators. The most obvious external differences are visible in the head with crocodiles having narrower and longer heads, with a more V-shaped than a U-shaped snout compared to alligators and caimans. Another obvious trait is that the upper and lower jaws of the crocodiles are the same width, and the teeth in the lower jaw fall along the edge or outside the upper jaw when the mouth is closed; therefore, all teeth are visible unlike an alligator; which possesses small depressions in the upper jaw, into which the lower teeth fit. Also, when the crocodile's mouth is closed, the large fourth tooth in the lower jaw fits into a constriction in the upper jaw. For hard-to-distinguish specimens, the protruding tooth is the most reliable feature to define the family that the species belongs to. Crocodiles have more webbing on the toes of the hind feet and can better tolerate saltwater due to specialized salt glands for filtering out salt, which are present but non-functioning in alligators. Another trait that separates crocodiles from other crocodilians is their much higher levels of aggression.