In this page you can download PNG image - Milk PNG. 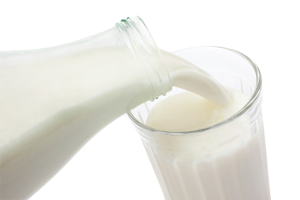 This image has format transparent PNG with resolution 300x200.
You can download this image in best resolution from this page and use it for design and web design.

Milk is a nutrient-rich, white liquid food produced by the mammary glands of mammals. It is the primary source of nutrition for infant mammals (including humans who are breastfed) before they are able to digest other types of food. Early-lactation milk contains colostrum, which carries the mother's antibodies to its young and can reduce the risk of many diseases. It contains many other nutrients including protein and lactose. Interspecies consumption of milk is not uncommon, particularly among humans, many of whom consume the milk of other mammals.

As an agricultural product, milk, also called dairy milk, is extracted from farm animals during or soon after pregnancy. Dairy farms produced about 730 million tonnes of milk in 2011, from 260 million dairy cows. India is the world's largest producer of milk, and is the leading exporter of skimmed milk powder, yet it exports few other milk products. The ever increasing rise in domestic demand for dairy products and a large demand-supply gap could lead to India being a net importer of dairy products in the future. New Zealand, Germany and the Netherlands are the largest exporters of milk products. China and Russia were the world's largest importers of milk and milk products until 2016 when both countries became self-sufficient, contributing to a worldwide glut of milk.

In many cultures, especially in the West, humans continue to consume milk beyond infancy, using the milk of other mammals (especially cattle, goats and sheep) as a food product. Initially, the ability to digest milk was limited to children as adults did not produce lactase, an enzyme necessary for digesting the lactose in milk. People therefore converted milk to curd, cheese and other products to reduce the levels of lactose. Thousands of years ago, a chance mutation spread in human populations in Europe that enabled the production of lactase in adulthood. This mutation allowed milk to be used as a new source of nutrition which could sustain populations when other food sources failed. Milk is processed into a variety of products such as cream, butter, yogurt, kefir, ice cream, and cheese. Modern industrial processes use milk to produce casein, whey protein, lactose, condensed milk, powdered milk, and many other food-additives and industrial products.

Whole milk, butter and cream have high levels of saturated fat. The sugar lactose is found only in milk, forsythia flowers, and a few tropical shrubs. The enzyme needed to digest lactose, lactase, reaches its highest levels in the human small intestine after birth and then begins a slow decline unless milk is consumed regularly. Those groups who do continue to tolerate milk, however, often have exercised great creativity in using the milk of domesticated ungulates, not only of cattle, but also sheep, goats, yaks, water buffalo, horses, reindeer and camels. India is the largest producer and consumer of cattle and buffalo milk in the world

The females of all mammal species can by definition produce milk, but cow's milk dominates commercial production. In 2011, FAO estimates 85% of all milk worldwide was produced from cows. Human milk is not produced or distributed industrially or commercially; however, human milk banks collect donated human breastmilk and redistribute it to infants who may benefit from human milk for various reasons (premature neonates, babies with allergies, metabolic diseases, etc.) but who cannot breastfeed.

In the Western world, cow's milk is produced on an industrial scale and is by far the most commonly consumed form of milk. Commercial dairy farming using automated milking equipment produces the vast majority of milk in developed countries. Dairy cattle such as the Holstein have been bred selectively for increased milk production. About 90% of the dairy cows in the United States and 85% in Great Britain are Holsteins. Other dairy cows in the United States include Ayrshire, Brown Swiss, Guernsey, Jersey and Milking Shorthorn (Dairy Shorthorn).