In this page you can download PNG image - hazelnut PNG. 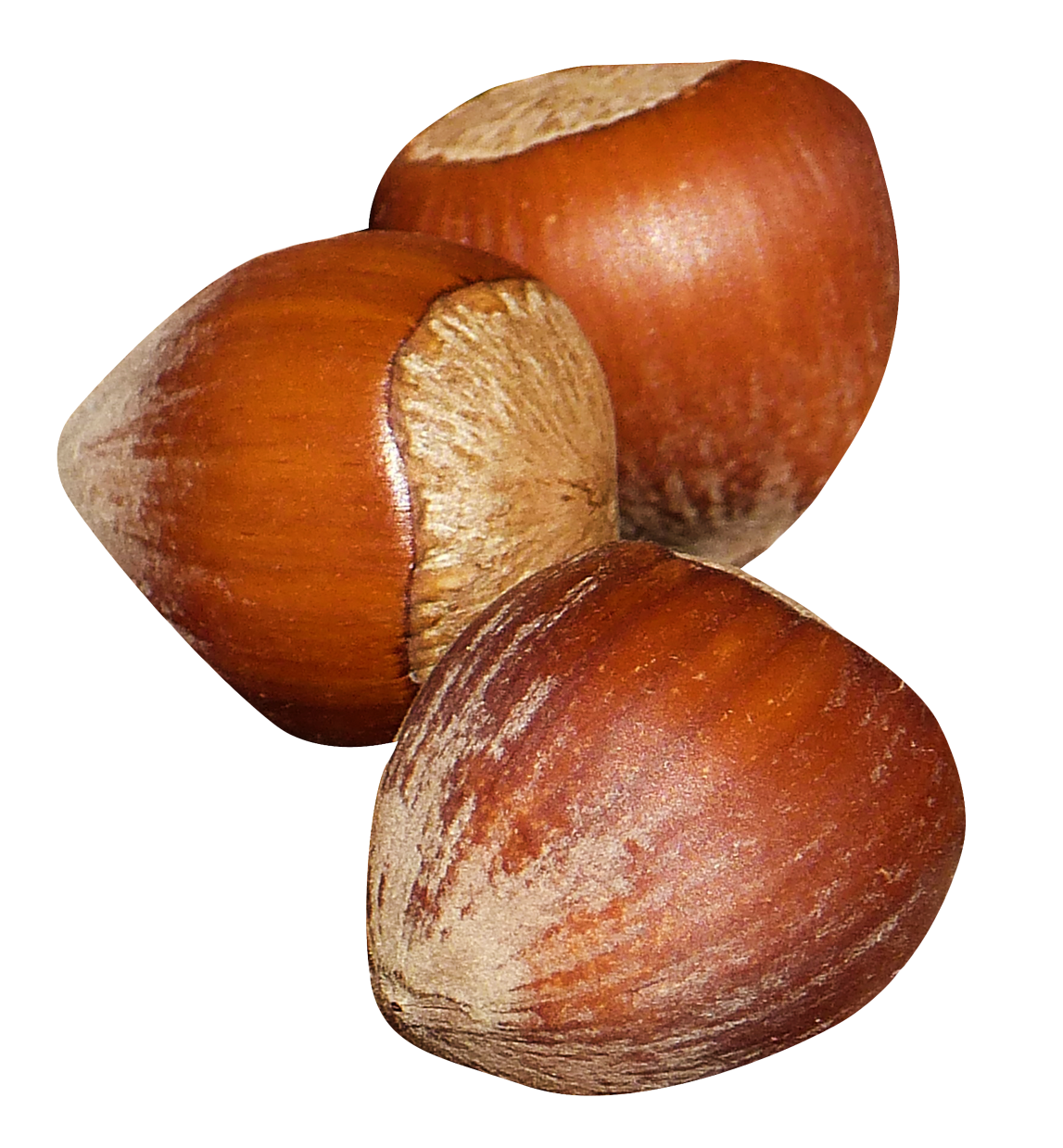 This image has format transparent PNG with resolution 1147x1239.
You can download this image in best resolution from this page and use it for design and web design.

The hazelnut is the fruit of the hazel tree and therefore includes any of the nuts deriving from species of the genus Corylus, especially the nuts of the species Corylus avellana. They are also known as cobnuts or filberts according to species.

Hazelnuts are used in baking and desserts, confectionery to make praline, and also used in combination with chocolate for chocolate truffles and products such as chocolate bars, hazelnut cocoa spread such as Nutella, and Frangelico liqueur. Hazelnut oil, pressed from hazelnuts, is strongly flavored and used as a cooking oil. Turkey and Italy are the world's two largest producers of hazelnuts.

A cob is roughly spherical to oval, about 15–25 millimetres (5⁄8–1 inch) long and 10–15 mm (3⁄8–5⁄8 in) in diameter, with an outer fibrous husk surrounding a smooth shell, while a filbert is more elongated, being about twice as long as its diameter. The nut falls out of the husk when ripe, about seven to eight months after pollination. The kernel of the seed is edible and used raw or roasted, or ground into a paste. The seed has a thin, dark brown skin, which is sometimes removed before cooking.

The many cultivars of the hazel include 'Atababa', 'Barcelona', 'Butler', 'Casina', 'Clark', 'Cosford', 'Daviana', 'Delle Langhe', 'England', 'Ennis', 'Halls Giant', 'Jemtegaard', 'Kent Cob', 'Lewis', 'Tokolyi', 'Tonda Gentile', 'Tonda di Giffoni', 'Tonda Romana', 'Wanliss Pride', and 'Willamette'. Some of these are grown for specific qualities of the nut, including large nut size, or early or late fruiting, whereas others are grown as pollinators. The majority of commercial hazelnuts are propagated from root sprouts. Some cultivars are of hybrid origin between common hazel and filbert.

In Ireland and The United Kingdom, hazelnuts are sometimes referred to as cobnuts, for which a specific cultivated variety – Kent cobnuts – is the main variety cultivated in fields known as plats, hand-picked, and eaten green. According to the BBC, a national collection of cobnut varieties exists at Roughway Farm in Kent. They are called cobnuts because cob was a word used to refer to the head or "noggin", and children had a game in which they would tie a string to a hazelnut and use it to try to hit an opponent on the head.

In 2020, world production of hazelnuts (in shells) was 1.1 million tonnes. The hazelnut production in Turkey accounts for 62% of the world total, followed by Italy, the United States, Azerbaijan, Chile, and Georgia. The large number of hazelnut farms in Turkey and the influx of Syrian refugees raised concerns of child labor and exploitation.

In the United States, Oregon accounted for 99% of the nation's production in 2014, having a crop value of $129 million that is purchased mainly by the snack food industry.

Ferrero SpA, the maker of Nutella and Ferrero Rocher, uses 25% of the global supply of hazelnuts. This commercial product, Nutella, came under pressure after a 2019 BBC investigation found that migrant child labour is used on many hazelnut orchards in Turkey.

Hazelnuts are used in confections to make pralines, chocolate truffles, and hazelnut paste products. In Austria, hazelnut paste is an ingredient for making tortes, such as Viennese hazelnut torte. In Kyiv cake, hazelnut flour is used to flavor its meringue body, and crushed hazelnuts are sprinkled over its sides. Dacquoise, a French dessert cake, often contains a layer of hazelnut meringue. Hazelnuts are used in Turkish cuisine and Georgian cuisine; the snack churchkhela and sauce satsivi are used, often with walnuts. Hazelnuts are also a common constituent of muesli. The nuts may be eaten fresh or dried, having different flavors.