In this page you can download PNG image - Heron PNG. 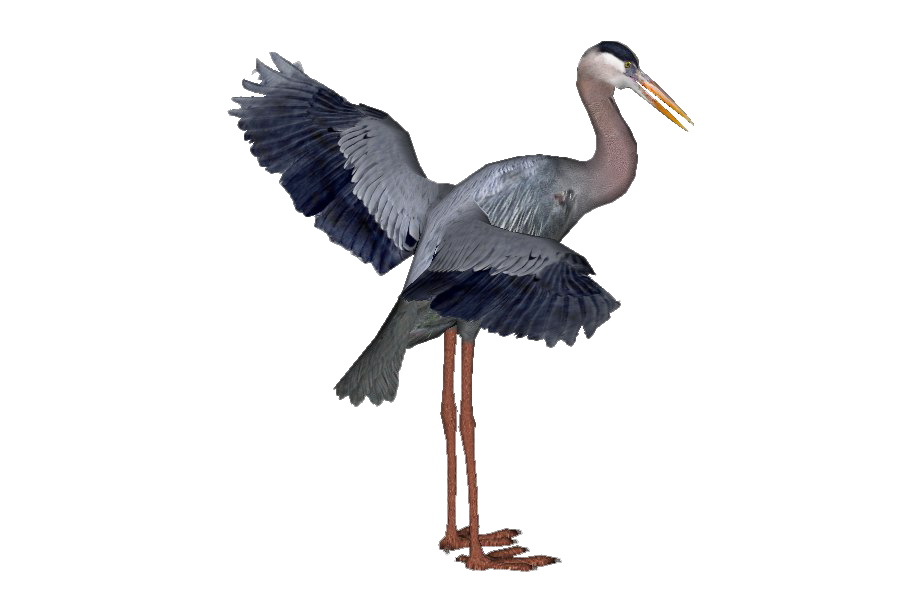 This image has format transparent PNG with resolution 920x612.
You can download this image in best resolution from this page and use it for design and web design.

The herons are long-legged, long-necked, freshwater and coastal birds in the family Ardeidae, with 72 recognised species, some of which are referred to as egrets or bitterns rather than herons. Members of the genera Botaurus and Ixobrychus are referred to as bitterns, and, together with the zigzag heron, or zigzag bittern, in the monotypic genus Zebrilus, form a monophyletic group within the Ardeidae. Egrets do not form a biologically distinct group from herons, and tend to be named differently because they are mainly white or have decorative plumes in breeding plumage. Herons, by evolutionary adaptation, have long beaks.

The classification of the individual heron/egret species is fraught with difficulty, and no clear consensus exists about the correct placement of many species into either of the two major genera, Ardea and Egretta. Similarly, the relationships of the genera in the family are not completely resolved. However, one species formerly considered to constitute a separate monotypic family, the Cochlearidae or the boat-billed heron, is now regarded as a member of the Ardeidae.

Although herons resemble birds in some other families, such as the storks, ibises, spoonbills, and cranes, they differ from these in flying with their necks retracted, not outstretched. They are also one of the bird groups that have powder down. Some members of this group nest colonially in trees, while others, notably the bitterns, use reed beds. A group of them is called a "siege."

The herons are medium- to large-sized birds with long legs and necks. They exhibit very little sexual dimorphism in size. The smallest species is usually considered the dwarf bittern, which measures 25–30 cm (10–12 in) in length, although all the species in the genus Ixobrychus are small and many broadly overlap in size. The largest species of heron is the goliath heron, which stands up to 152 cm (60 in) tall. The necks are able to kink in an S-shape, due to the modified shape of the cervical vertebrae, of which they have 20–21. The neck can retract and extend and is retracted during flight, unlike most other long-necked birds. The neck is longer in the day herons than the night herons and bitterns. The legs are long and strong and in almost every species are unfeathered from the lower part of the tibia (the exception is the zigzag heron). In flight, the legs and feet are held backwards. The feet of herons have long, thin toes, with three forward pointing ones and one pointing backwards.

The bill is generally long and harpoon-like. It can vary from extremely fine, as in the agami heron, to thick as in the grey heron. The most atypical bill is owned by the boat-billed heron, which has a broad, thick bill. The bill and other bare parts of the body are usually yellow, black, or brown in colour, although this can vary during the breeding season. The wings are broad and long, exhibiting 10 or 11 primary feathers (the boat-billed heron has only nine), 15–20 secondaries, and 12 rectrices (10 in the bitterns). The feathers of the herons are soft and the plumage is usually blue, black, brown, grey, or white, and can often be strikingly complex. Amongst the day herons, little sexual dimorphism in plumage is seen (except in the pond-herons); differences between the sexes are the rule for the night herons and smaller bitterns. Many species also have different colour morphs. In the Pacific reef heron, both dark and light colour morphs exist, and the percentage of each morph varies geographically. White morphs only occur in areas with coral

The herons are a widespread family with a cosmopolitan distribution. They exist on all continents except Antarctica and are present in most habitats except the coldest extremes of the Arctic, extremely high mountains, and the driest deserts. Almost all species are associated with water; they are essentially non-swimming waterbirds that feed on the margins of lakes, rivers, swamps, ponds, and the sea. They are predominantly found in lowland areas, although some species live in alpine areas, and the majority of species occur in the tropics.

The herons are a highly mobile family, with most species being at least partially migratory; for example, the grey heron is mostly sedentary in Britain, but mostly migratory in Scandinavia. Birds are particularly inclined to disperse widely after breeding, but before the annual migration, where the species is colonial, searching out new feeding areas and reducing the pressures on feeding grounds near the colony. The migration typically occurs at night, usually as individuals or in small groups.