In this page you can download PNG image - Volodymyr Zelensky signature PNG. 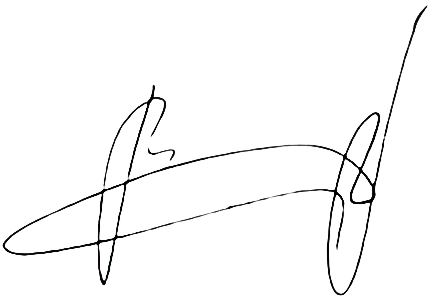 This image has format transparent PNG with resolution 432x298.
You can download this image in best resolution from this page and use it for design and web design.

Zelenskyy grew up as a native Russian speaker in Kryvyi Rih, a major city of Dnipropetrovsk Oblast in central Ukraine. Prior to his acting career, he obtained a degree in law from the Kyiv National Economic University. He then pursued comedy and created the production company Kvartal 95, which produced films, cartoons, and TV shows including the TV series Servant of the People, in which Zelenskyy played the role of the Ukrainian president. The series aired from 2015 to 2019 and was immensely popular. A political party bearing the same name as the television show was created in March 2018 by employees of Kvartal 95.

Zelenskyy announced his candidacy in the 2019 Ukrainian presidential election on the evening of 31 December 2018, alongside the New Year's Eve address of then-President Petro Poroshenko on the TV channel 1+1. A political outsider, he had already become one of the frontrunners in opinion polls for the election. He won the election with 73.23% of the vote in the second round, defeating Poroshenko. He has positioned himself as an anti-establishment and anti-corruption figure.

As president, Zelenskyy has been a proponent of e-government and unity between the Ukrainian- and Russian-speaking parts of the country's population.: 11–13  His communication style heavily utilises social media, particularly Instagram.: 7–10  His party won a landslide victory in a snap legislative election held shortly after his inauguration as president. During his administration, Zelenskyy oversaw the lifting of legal immunity for members of the Verkhovna Rada, the country's response to the COVID-19 pandemic and subsequent economic recession, and some progress in tackling corruption in Ukraine. Critics of Zelenskyy claim that, in taking power away from Ukrainian oligarchs, he has sought to centralise authority and strengthen his personal position.

Zelenskyy promised to end Ukraine's protracted conflict with Russia as part of his presidential campaign, and attempted to engage in dialogue with Russian president Vladimir Putin. Zelenskyy's administration faced an escalation of tensions with Russia in 2021, culminating in the launch of an ongoing full-scale Russian invasion in February 2022. Zelenskyy's strategy during the Russian military buildup was to calm the Ukrainian populace and assure the international community that Ukraine was not seeking to retaliate. He initially distanced himself from warnings of an imminent war, while also calling for security guarantees and military support from NATO to "withstand" the threat. After the commencement of the invasion, Zelenskyy declared martial law across Ukraine and a general mobilisation of the armed forces. His leadership during the crisis won him widespread international admiration, and he has been described as a symbol of Ukrainian resistance.