In this page you can download PNG image - Doge (meme) PNG image. 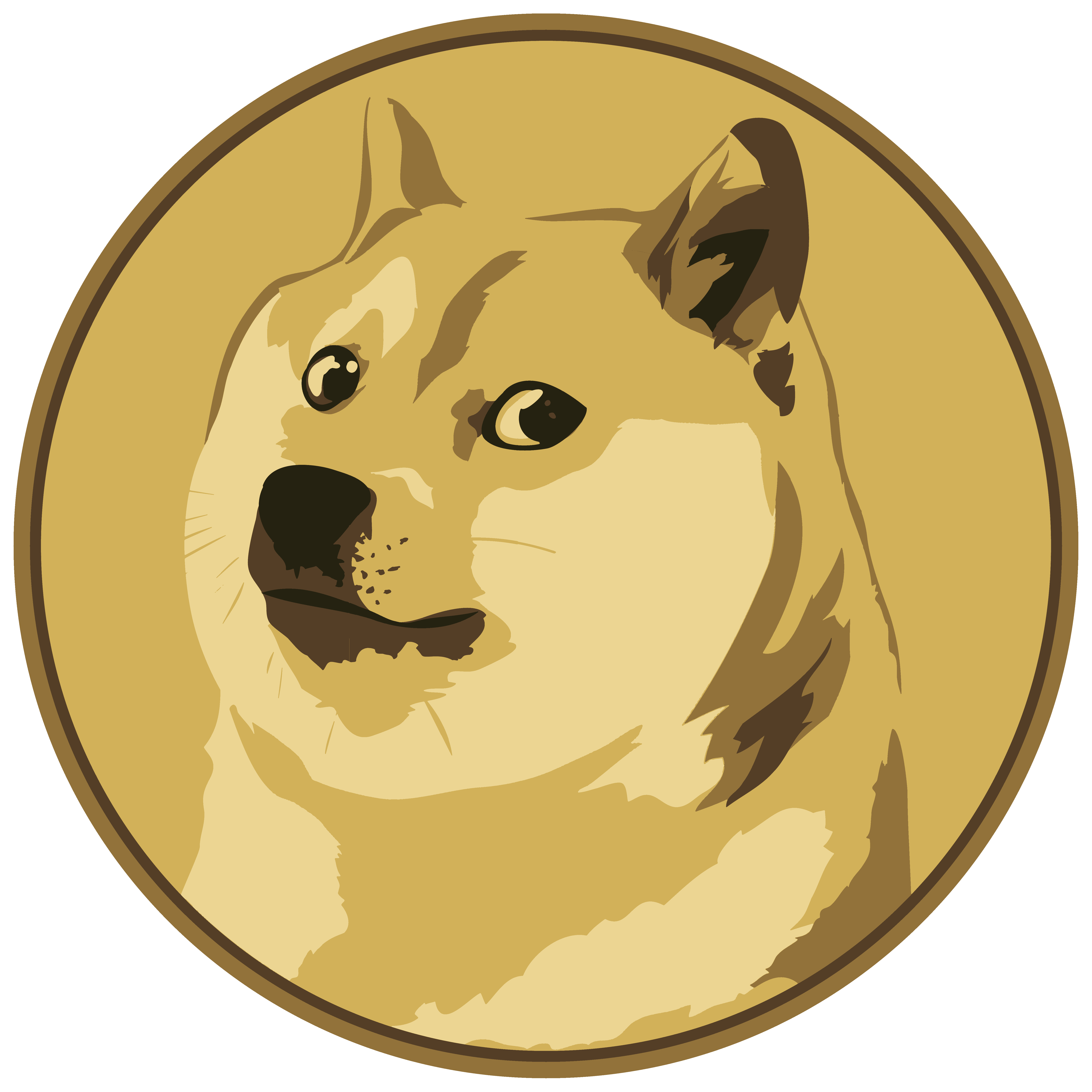 This image has format transparent PNG with resolution 6000x6000.
You can download this image in best resolution from this page and use it for design and web design.

Doge (often /ˈdoʊdʒ/ DOHJ, /ˈdoʊɡ/ DOHG, /ˈdoʊʒ/ DOHZH) is an Internet meme that became popular in 2013. The meme typically consists of a picture of a Shiba Inu dog accompanied by multicolored text in Comic Sans font in the foreground. The text, representing a kind of internal monologue, is deliberately written in a form of broken English.

The meme is based on a 2010 photograph, and became popular in late 2013, being named as Know Your Meme's "top meme" of that year. A cryptocurrency based on Doge, the Dogecoin, was launched in December 2013. The Shiba Inu had a notable presence in popular culture during late 2013. Toward the end of the decade and the beginning of the 2020s, the meme saw a resurgence in popularity due primarily to its association with Dogecoin, which itself hit a market capitalisation of over $90 billion in May 2021. Several online polls and media outlets recognized Doge as one of the best Internet memes of the 2010s.

Doge uses two-word phrases in which the first word is almost always one of five modifiers ("so", "such", "many", "much", and "very"), and the departure from correct English is to use the modifier with a word that it cannot properly modify. For example, "Much respect. So noble." uses the Doge modifiers but is not "proper" Doge because the modifiers are used in a formally correct fashion; the Doge version would be "Much noble, so respect." In addition to these phrases, a Doge utterance often ends with a single word, most often "wow" but with "amaze" and "excite" also being used.

Since the inception of the meme, several variations and spin-offs have been created, including "liquified Doge", a variation wherein the dog's shape is morphed into other animals, and "ironic Doge", a version where the Doge character is put into ironic and uncharacteristic situations. The ironic Doge memes have spawned several other related characters, often dogs themselves. One of which is Cheems, another Shiba Inu who is typically characterized by a speech impediment that adds the letter "M" throughout its speech. Walter, a bull terrier character who is typically portrayed as liking "moster trucks" and firetrucks, is another commonly recurring ironic Doge character. These memes are mostly present on subreddits like r/dogelore. One meme which became popular in 2020 was "Swole Doge vs. Cheems", in which a muscular Doge and a baby Cheems are depicted as something considered better in the past, and its modern version, respectively.

Kabosu (Japanese: かぼす, born 2 November 2005), the female Shiba Inu featured in the original meme, is a pedigree puppy who was sent to an animal shelter when her puppy mill shut down. She was adopted in 2008 by Japanese kindergarten teacher Atsuko Satō, and named after the citrus fruit kabosu because Sato thought she had a round face like the fruit. Another Shiba Inu featured in the meme is Suki, a female belonging to photographer Jonathan Fleming from San Francisco. His wife had accidentally put a scarf in the wash, making it shrink. He took a photograph of Suki wearing the scarf outside on a cold night in February 2010.

Kabosu was first pictured in a 2010 blog post by Sato; afterwards, variations of the pictures using overlaid Comic Sans text were posted from a Tumblr blog, Shiba Confessions. However, the use of the intentionally misspelled "Doge" dates back to June 2005, when it was mentioned in an episode of Homestar Runner's puppet series. The meme began to grow in popularity after it was used on Reddit in October 2010 in a post titled "LMBO LOOK @ THIS FUKKEN DOGE."

Some of the other characters used in the meme are based on photographs of real dogs. Cheems is based on an image of a dog named Balltze, from Hong Kong; he was adopted at the age of one and was nine years old in 2020. Walter is based on the bull terrier Nelson, who originally became popular in 2018 after his owner, Victoria Leigh, posted a picture of Nelson to Twitter, with the caption "When u open the front-facing camera on accident." In 2020, rumors of Nelson's death began to circulate the internet, although they turned out to be false.