In this page you can download PNG image - Disco ball PNG. 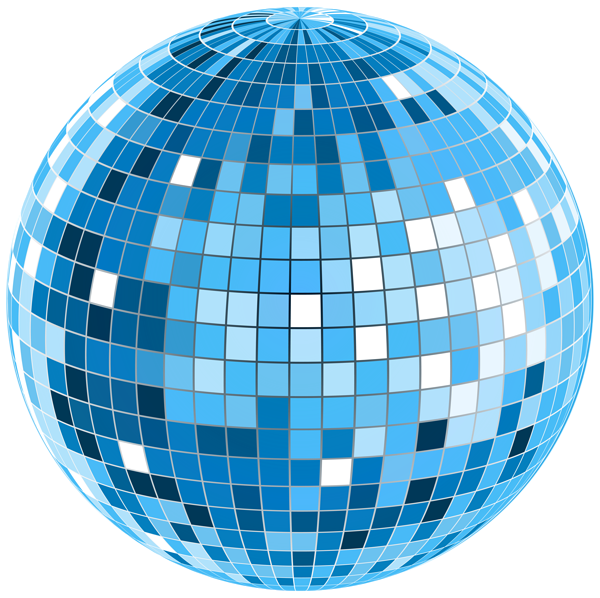 This image has format transparent PNG with resolution 600x598.
You can download this image in best resolution from this page and use it for design and web design.

A disco ball (also known as a mirror ball or glitter ball) is a roughly spherical object that reflects light directed at it in many directions, producing a complex display. Its surface consists of hundreds or thousands of facets, nearly all of approximately the same shape and size, and each having a mirrored surface. Usually it is mounted well above the heads of the people present, suspended from a device that causes it to rotate steadily on a vertical axis, and illuminated by spotlights, so that stationary viewers experience beams of light flashing over them, and see myriad spots of light spinning around the walls of the room.

What are now usually called "disco balls" were first widely used in nightclubs in the 1920s. An early example can be seen in the nightclub sequence of Berlin: Die Sinfonie der Großstadt, a German silent film from 1927. In the 1960s, 1970s and 1980s, these devices were a standard piece of equipment in discothèques, and by the turn of the millennium, the name "disco ball" had grown quite popular.[citation needed] A Louisville, Kentucky company currently known as Omega National Products claims to have made 90% of the disco balls used in the United States during the disco craze, and remains a supplier.

Miniature glitter balls are sold as novelties and used for a number of decorative purposes, including dangling from the rear-view mirror of an automobile or Christmas tree ornaments. Glitter balls may have inspired a homemade version in the sparkleball, the American outsider craft of building decorative light balls out of Christmas lights and plastic cups. The UK television series Strictly Come Dancing and US counterpart Dancing with the Stars award competition winners a "Glitter Ball Trophy".

The English rock band Yes used a variant of the disco ball in their 1972 "Close to the Edge" tour. This was a slowly spinning vertical mirror disk mounted atop a tall ladder, with a single spotlight aimed at it, used for the opening and closing birds/waterfall-sounds sequences of the title song Close to the Edge.

The Grateful Dead featured a disco ball in the band's 1977 concert documentary The Grateful Dead Movie. The film includes several sequences where glittery reflections from a disco ball fill San Francisco's Winterland Ballroom during a series of 1974 performances. "A twirling mirror ball overhead also adds some visual flash to the image," notes a reviewer.

Pink Floyd used a glitter ball on their 1987 and 1994 world tours. The glitter ball used on the 1987 tour was somewhat larger than normal but nowhere near as large as the glitter ball used on the 1994 tour. This particular glitter ball is one of the largest in the world. 4.9 metres in diameter, it rises to a height of 21.3 metres before opening to a width of 7.3 metres, revealing a 12 kilowatt Phoebus HMI lamp. Both can be seen on the video of each tour: "Delicate Sound of Thunder" and "Pulse" during the song "Comfortably Numb".

Madonna used a 2-ton glitter ball that was embellished by 2 million dollars' worth of Swarovski crystals for her Confessions Tour in 2006.

Every Raising Cane's restaurant has this type of ball, since its inception in Baton Rouge, LA in 1996.

Introducing disco balls to a new concert demographic, the pop punk band Paramore showcased dozens of spinning disco balls in 2014 as a glittering stage backdrop during the band's 37-city US Monumentour. The same disco ball backdrop was used that year at the UK Reading and Leeds Festivals, where the band co-headlined.